Being in LA, we get to do some really cool shit.  Like having a full-blown dance party on a boat at 6:30am with really amazing-energy people, getting our sweat in, and starting the morning with positive vibes, all before a days work!  Like who does this?! We do. And it’s amazing. It’s called DAYBREAKER and it’s the “Morning END_OF_DOCUMENT_TOKEN_TO_BE_REPLACED

MAY 1-3 My latest epic adventure was the Further Future Gathering, some might call it a “festival” but it was much more than that, it was an experience.  I have realized that I am part of a generation that loves bringing “unreal” environments and experiences to life, and it’s insane. Further Future was described to us END_OF_DOCUMENT_TOKEN_TO_BE_REPLACED

I have been really wanting to write about my experience at Further Future, the insane experience festival/gathering I went to at the beginning of May, but I haven’t been able to find time to do so.  So while I figure out what I am going to write, Cathleen Cher wrote about it beautifully in her article here:

THE WINDS OF CHANGE AT FURTHER FUTURE
By Cathleen Cher for Milkmaid.com 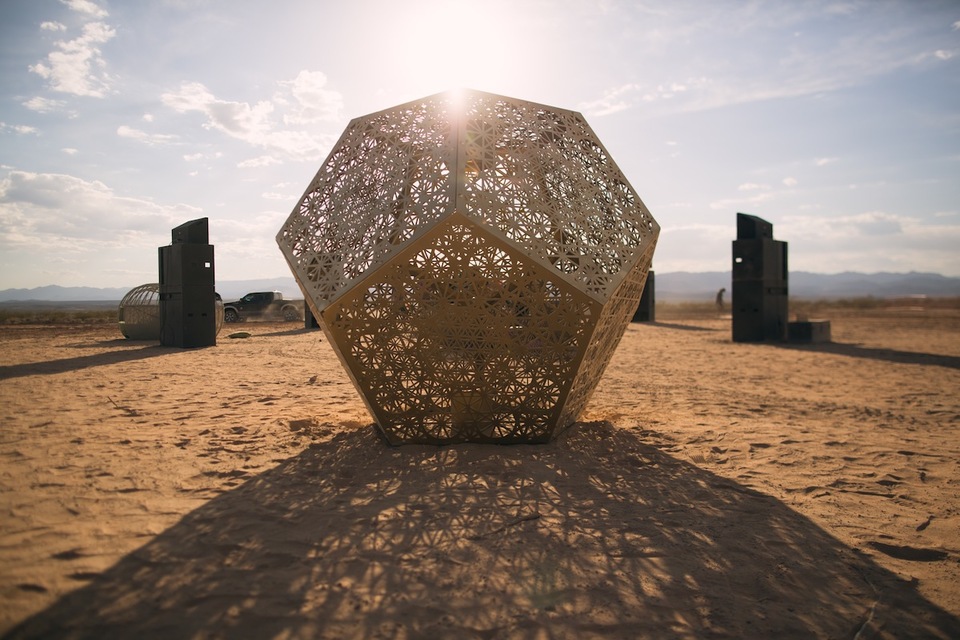 When I received a last minute invitation to attend Further Future, a festival put on by Burning Man community favorite, Robot Heart at the Moapa Indian Reservation in Nevada, I was immediately intrigued by the name. The festival’s official description was a celebration of “the infinite possibilities of our future, without necessarily being shackled to the dictates of the past or the cycles of present day society.” To achieve this, they promised to “combine the connective power of music and art to bring people together to shed their anxieties and fears, and touch a natural state of happiness.” The festival hoped to create a “culture of open thought and inquiry sharing ideas and aspirations with leading minds in the fields of art, business, science, technology and thought.” Others described it to me as a “bougie Burning Man.” 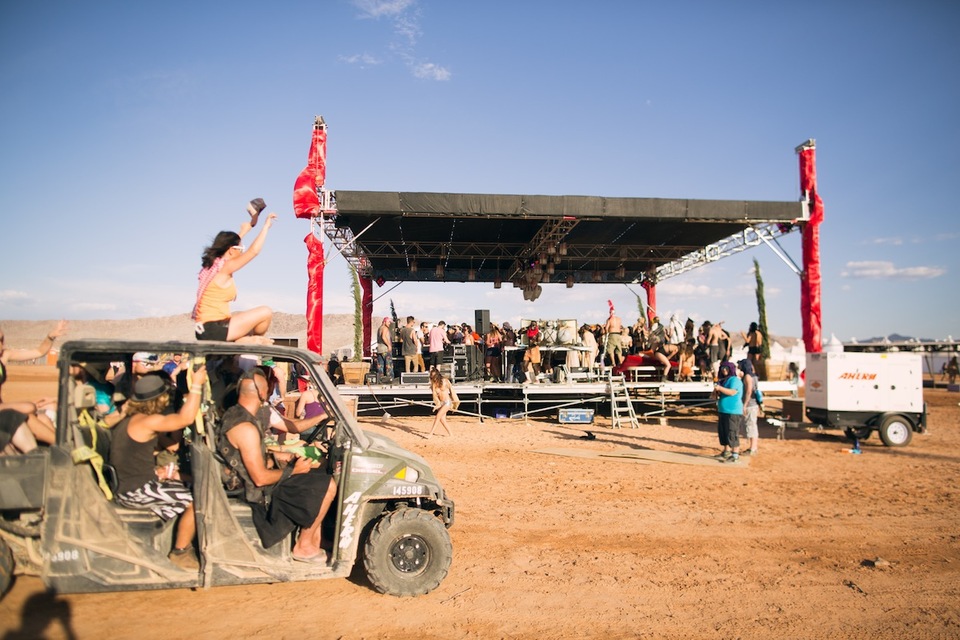 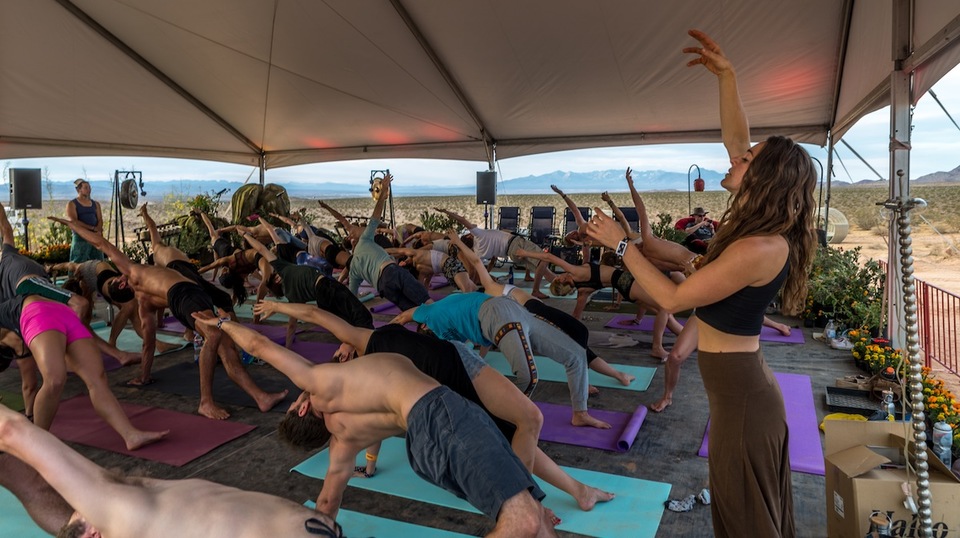 To someone who still has never braved Burning Man, it seemed like a safe and easier introduction. It offered luxury air-conditioned tents, access to showers and high-end spa services, as well as an expansive food selection that boasted fresh pressed juices, poutine (with vegan options), gourmet hot dogs, and Vietnamese favorites, like banh mi and pho. There was even a pop up dinner with acclaimed chef Sam Marvin of Echo & Rig in a beautiful white tent, where everyone sat on white pillows and gathered around communal tables decked out with flowers and candles. There were beautifully crafted “pods” that lined the festival, akin to those you would find at a luxury hotel in Miami, that provided temporary relief from the scorching near 100 degree temperatures and intermittent dust storms. Costumes are encouraged – ‘who are you in the Further Future?’ was the prompt, and if this was truly a tell on what people would be wearing in the future, I am here to report that pants will be discouraged. 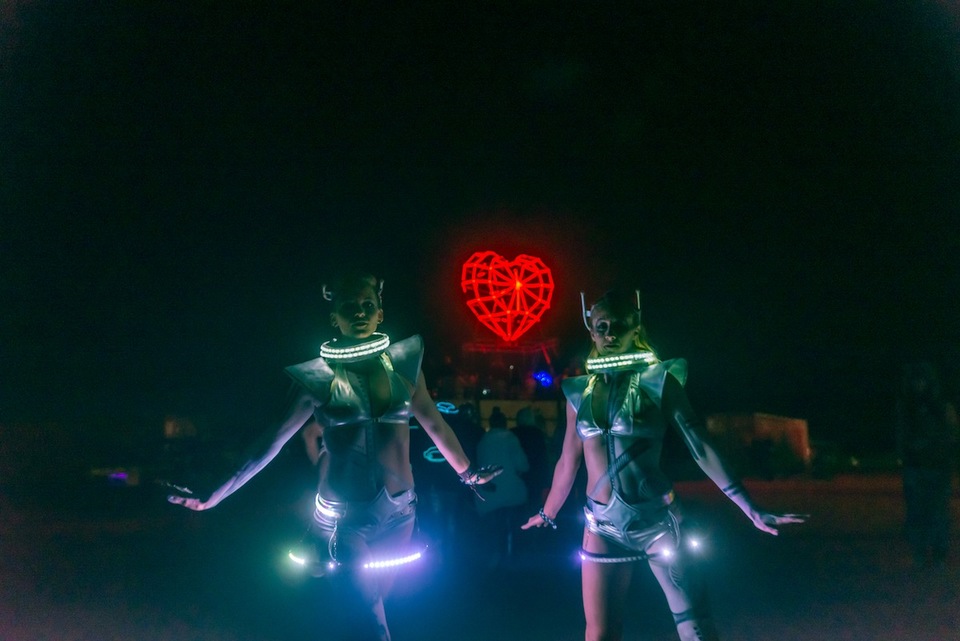 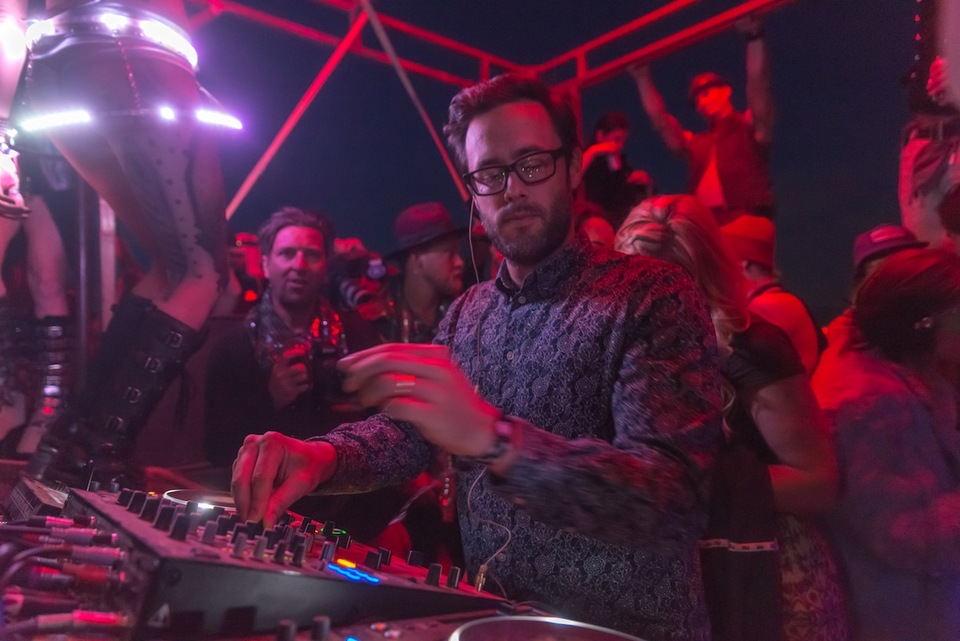 It seemed obvious that the crowd itself was curated, the median age skewed much older than any other festival I’d attended and it was clear that invitations were sent out to tastemakers, culture creators, entrepreneurs, and innovators, as intended. Those who didn’t receive an invitation and interested in attending were asked to “apply” with a short introduction about themselves, as they wanted “all attendees to have a basic understanding and appreciation of their values or trust and respect and love of exploration and discovery.” Among the people I met over the weekend, outside of writers from prominent media outlets, I made friends with the founder of the much buzzed about MyIntent Project(recently on Kanye West’s wrist on the cover of Time magazine), Chris Pan, got photos snapped by Cole Rise, the founder of the app Litely (and developer of 7 original filters of Instagram), and chatted with a woman, Casey Lum, who just opened a store, B.Poy & Jo, and would be leaving the festival to go straight to an award ceremony to be honored as one of the 20 celebrated new small business owners in LA. 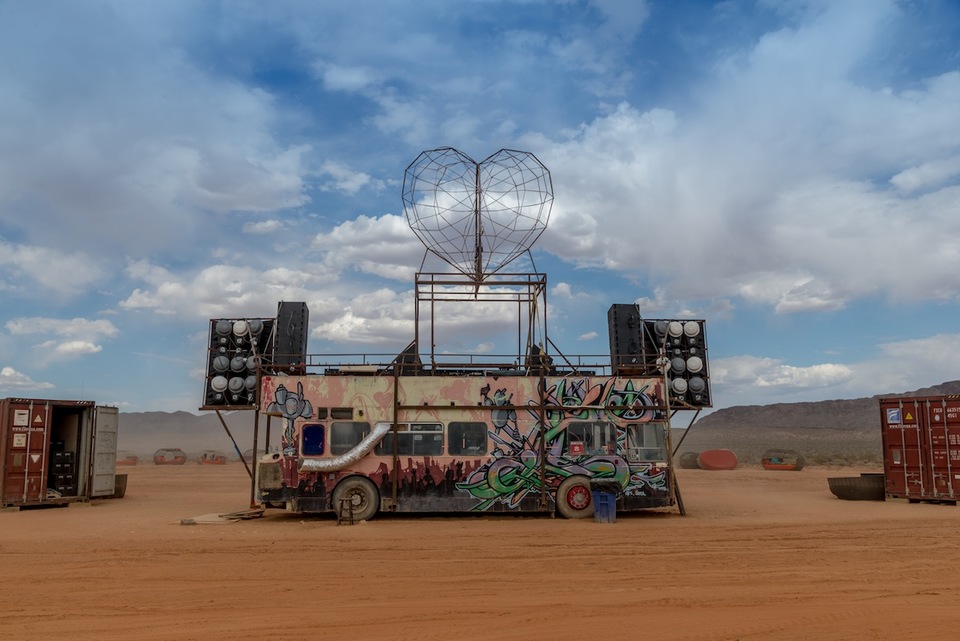 One of the unique offerings of Further Future was the line up of speakers brought to start enlightening conversations. Included among them was, Dr. Astro Teller, the Captain of Moonshoots for Google[x] who spoke about ‘Building the Future’, Alex Ljung, the CEO of SoundCloud, who imparted his knowledge on ‘The Future of Music Distribution’, and Phil Libin, the CEO of Evernote who spoke on ‘The Meaning of Life’, which he concluded in an urge for people to “do something that can help people attain the divine spark.” The actual music stages were few and close together, which allowed for easy and enjoyable access, and with about 1000 total attendees, it was never difficult to get a good spot. Standouts included Damian Lazarus & The Ancient Moons, who seemed like he belonged in the desert with his intricate outfit, Tropicool, who got everyone dancing on a small elevated stage which everyone could fit on and dance together. Miguel Migs brought on Lisa Shaw to sing and remind everyone of the soulful origins of house. Rhye, whose effortlessly beautiful voice soared through the desert night sky, and Nosaj Thing, whose mesmerizing set ended at an early 5AM and set the tone for the last day. The entire festival was then closed out by crowd favorite, Bob Moses, who delivered what felt like a homecoming performance—they interacted with the crowd like old friends, swigging whiskey in between songs, and everyone danced and sang along with a knowing fervor of familiarity. 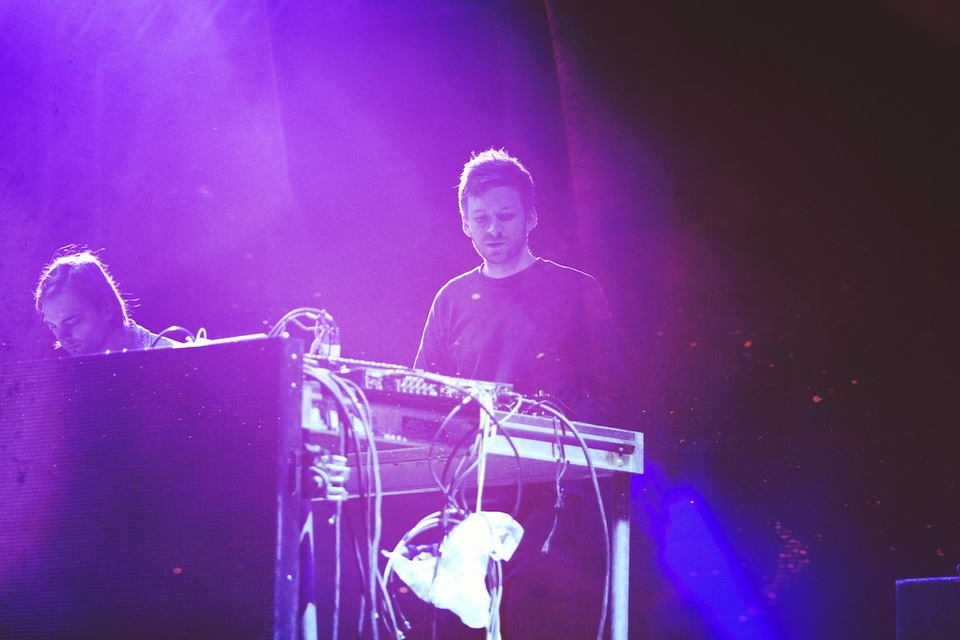 Processed with VSCOcam with c1 preset[/caption]

One of the major themes of FF was “hack your consciousness”, and they intended to do so by providing devices that directly influence brain waves and inspire connection, soul gazing, emotion sharing (an introduction to 20 second hugs), long sessions of sunrise + sunset yoga, sound therapy meditation, and an extended Gamelatron gong bath. I was especially enthralled by a device known as the Biotron, which had an entrance fashioned after a vagina, which turned out to be collective sound light therapypod that would help slow down brain waves. I was told that scientifically, Biotronesis is a phenomenon where brainwave frequencies tend to follow periodic external stimulation, and at our different conscious states, there is a measurable neural oscillation rate/frequency. The 14 minute pod experience, which I shared in a warm and plush all white fluffy environment with 11 other new friends, had us lay down and listen to soothing gongs while staring at the ceiling that had strings of neon lights running through it. With the help of the hypnotic effect of the lights, we started off with the awake Beta frequency (12-30Hz), began weaving in and out, stepladdering down through all the scales of Beta, Theta, Alpha, Delta, then slowly back up. The desire for this experiment was to facilitate a state of calmness for everyone involved. 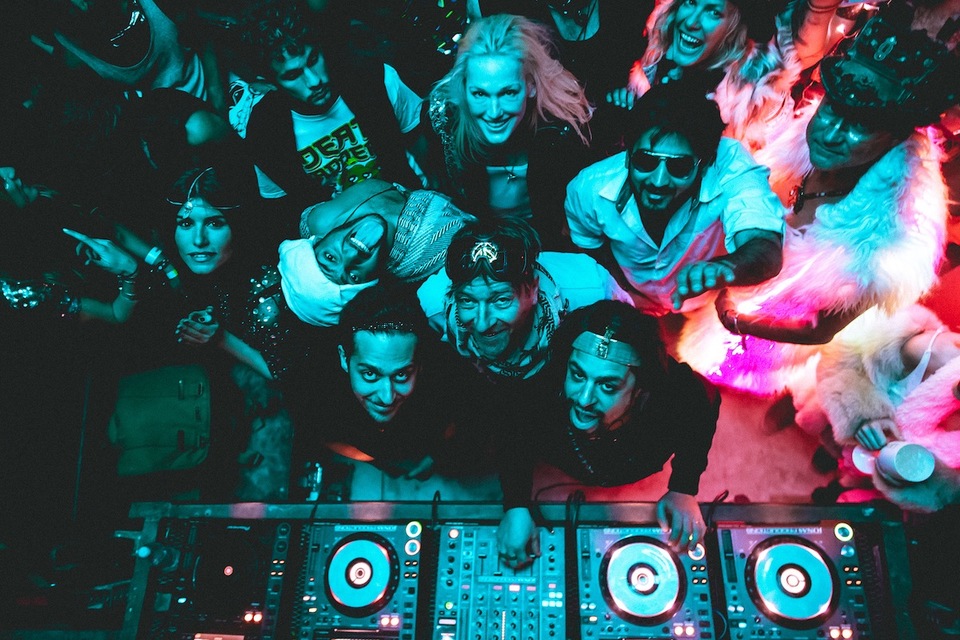 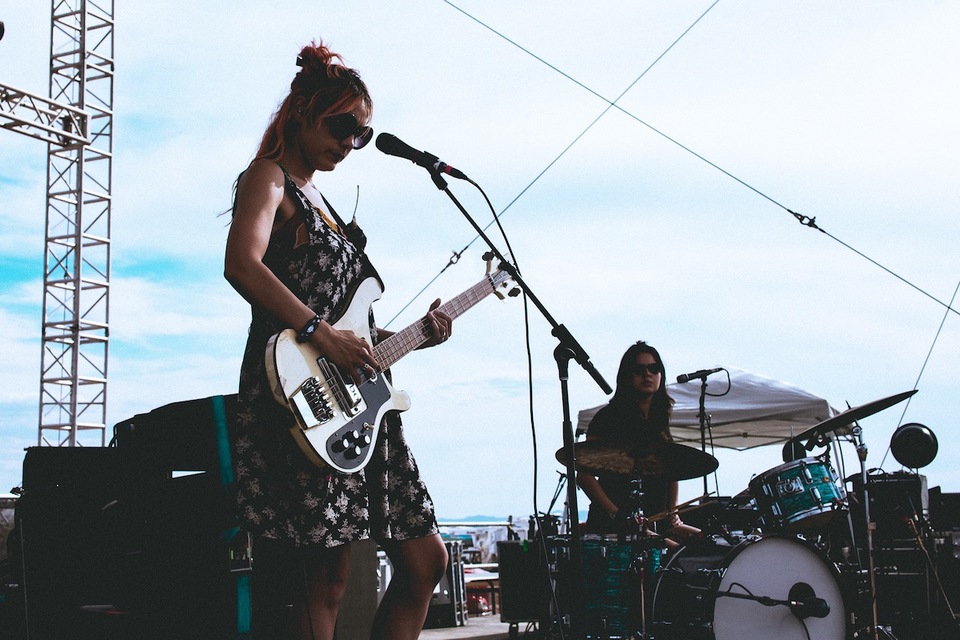 My personal experience in this pod was indicative of what this festival was about—it utilized and exposed you to the newest technology, brought people together, instilled an inner calmness through external excitement, harnessed the power of sound and visuals to inspire a feeling of connectedness, and then left you with a greater appreciation for the beauty of art and the human condition. 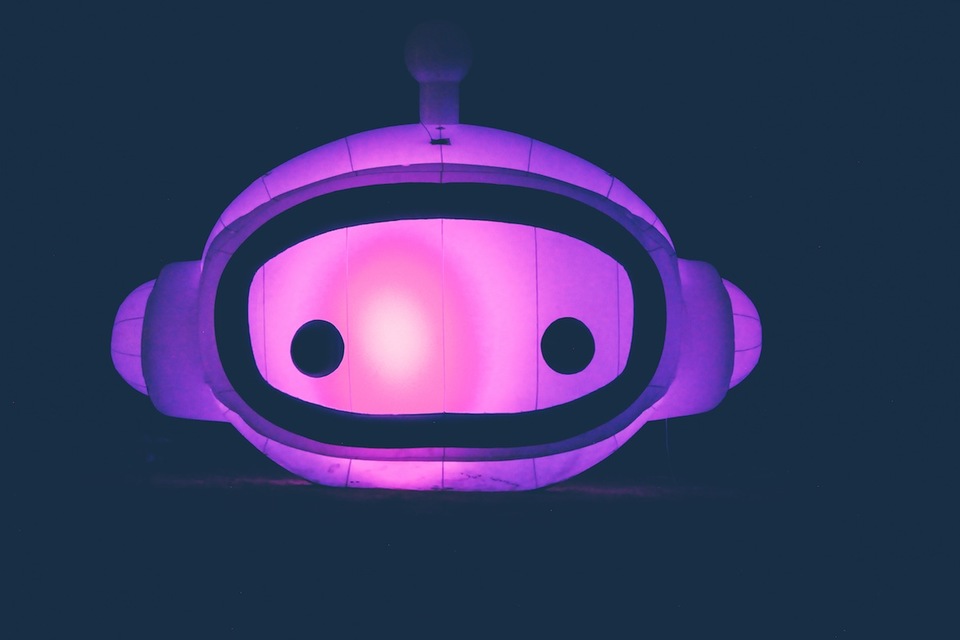 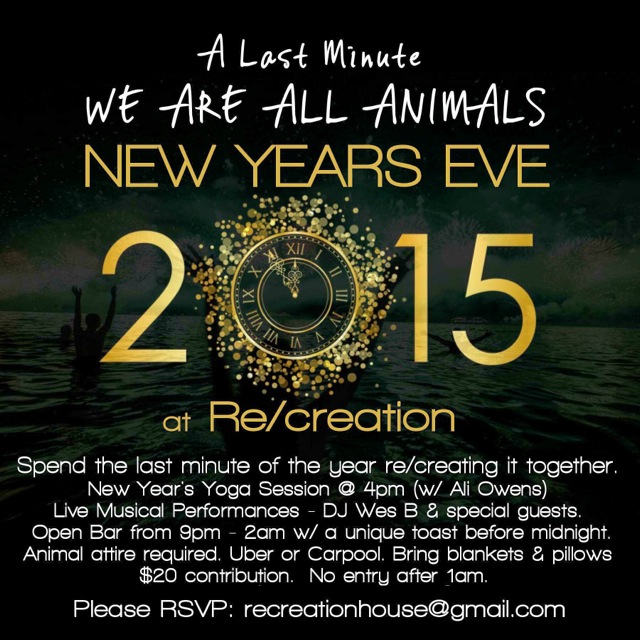 THE INTENTION FROM THE HOST:

The intention I would like to create for the night is to LET GO of whatever didn’t serve us in 2014 so that we can make room for something NEW in 2015.  A new year really isn’t a new year if it’s the same old us, and we don’t make room for anything, or anyone else.  The costumes are intended to give us permission to be child-like and playful, and allow ourselves to experience everyone with the openness and joy we once had. So, for the night let’s set aside any expectation for what a NYE celebration should be, and come together with playful enthusiasm to invite in whatever the new year has to offer.
THE PARTY <3: 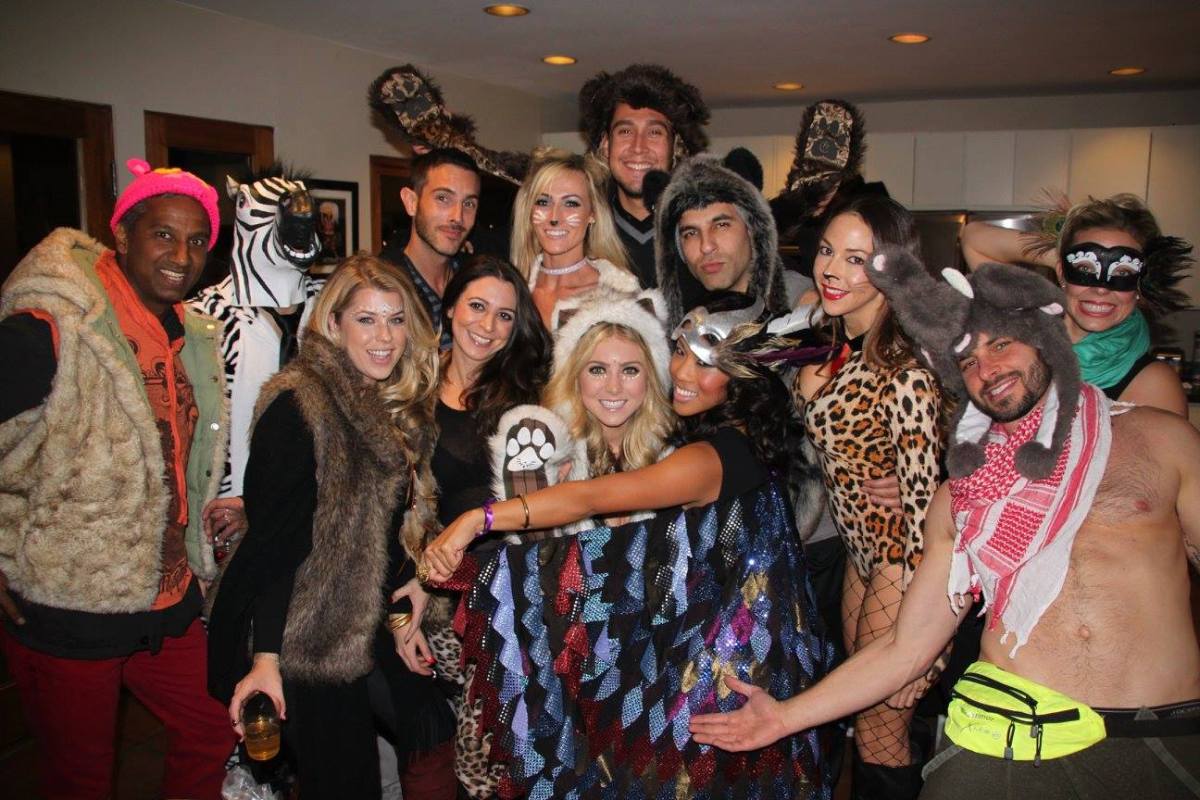 This was a very beautiful night captured by many free spirits.  We all came with the intention to let go of 2014 and BE in that very moment.  I was very blessed to be surrounded by such amazing souls to ring in 2015.
Party lasted all night until the sun came up!
HAPPY NEW YEAR ALL!
Loading Comments...